Library on the Go: Park/Head Start and Evaluation 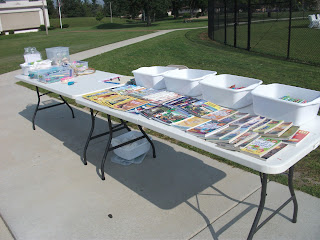 Summer school finished last week and I had to decide whether I was going to run this program in August or not. August tends to be really slow in my town, not much going on, although the kids don't go back to school until after Labor Day.

I had asked the pool manager if I could set up at the pool and I figured I'd try that at least once. I set up at 9 and it was pretty dead. They have an adult exercise class then so there were just a couple kids wandering over to the park or waiting for the pool to open. Once it opened to the public at 10 there were a lot more people but I was in the wrong area to connect with them - they come around the other side.

At 11 I noticed a lot of kids up at the Lion's Den (this is the picnic area that can be rented) and I went up to investigate. I found all my Headstart friends! We had missed each other in the communication of who was where when! So I hauled everything up there, checked out over 30 books, had more than 30 kids making crafts and chatting, some day camp kids wandered over as well. However, this isn't repeatable - the Lion's Den is usually booked for parties and the people who can afford a pool pass aren't really the group I'm looking for anyways. I decided to call it a successful start to the program and I have plans to take LotG to the next Headstart play group in September and make the materials available to classrooms during the school year. About 70 books are still in circulation but I expect most of those will eventually make their way back to me.

Notes for the future


Overall, I think this was very successful. I checked out over 140 books, signed up about 45 kids for summer reading, and usually had 20-30 kids doing crafts and chatting about books at each visit. I won't count up the number of non-returned books until the end of August (and still expect some to come back through school later) but I did lose 4 books to water damage.
Posted by Jennifer at 11:41 AM

Email ThisBlogThis!Share to TwitterShare to FacebookShare to Pinterest
Labels: Library on the Go