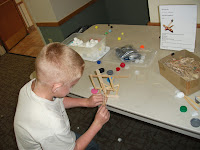 I made some signs with instructions and pictures from several online sources, one for a super easy catapult and one for a more difficult model. I laminated these and put them out on the tables for people to refer to. I also put a warning sign that only adults could use the hot glue gun!


Project: Mini-Marshmallow Shooters
I had a variety of cups and sizes of balloons that kids could experiment with. It really only works well with really hard plastic cups, but we did fine experimenting with other cups and paper tubes. This would also work with pompoms, you don't have to use marshmallows. I got this from Amy Koester.


Experiment: Racing cars/Marble Run
I was inspired by this program and this program as well as some of the experiments in Motion by Ellen Lawrence to make an experiment where the kids could try different kinds of friction and gravity. I set up some suggestions/rules and the kids did car races.

I got this from Read Sing Play. The kids put a balloon over the mouth of an empty bottle. Put in very cold and then very hot water and the balloon inflates.

I also got this from Read Sing Play. It's just a fan and straws and you practice blowing things - how far can you blow, which blows faster the fan or the straw, etc.